Last year I have selected this photo of a lovely fountain capturing 3 girls under umbrellas (Drei-Mädchen-Brunnen) in Ballplatz Mainz in support of #ChildhoodCancerAwarnessMonth. This fountain was built between two Catholic girl’s schools symbolising the separate education and a happy childhood. It is charming on its own. And I’ve select it again.
Every child deserves a happy childhood. Raising awareness about childhood cancer we help to make the dreams of children with cancer come true. Dreams for a happy childhood, better treatment, better quality of life full of love ahead through better funding of childhood cancer research and access to innovative treatments.

Though the official announcement is scheduled for the first week of June, the groundwork is on. Lots of reading and planning for the trip to Johns Hopkins later this year. One of the first is the book by Rebecca Skloot ‘The Immortal Life Of  Henrietta Lacks”. The famous HeLa cells were generated by researchers at JH. The story is a fascinating journey for biomedical scientists and a tragedy for the Lacks family. 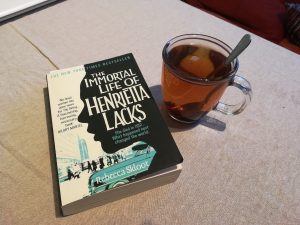 When I look back on my journey in 2017, there were many junctions, traffic lights and stops as well as ups and downs. Junctions were to make decisions, while traffic lights and stops – to be patient. Ups and downs were my feelings of satisfaction. The good mix of both kept me to stay human. It is not the number of grants received that matters it is who around you. I have met genuinely curiosity-driven students who made this journey fascinating and very special. 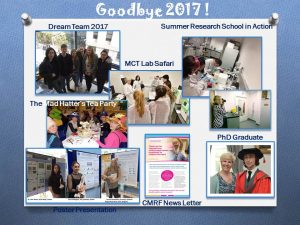 My most memorable Ups  were the successful examination and graduation of my PhD student John Nolan, organisation and chairing the IACR Meeting session: Challenges in Childhood Cancers, the Mad Hatter’s Tea Party and the Gala Dinner with the CFNCRF, the launch of my very own research team thanks to the funding by the NCRC and the Neuroblastoma UK, the successful completion of two final year undergraduate and two MSc projects, and welcoming the new PhD student Tom Frawley.

My team is growing and I am looking forward to 2018!

The researcher’s path includes days when you feel so low because your grant or paper was rejected or even both within a very short time frame. It happened to me a couple of weeks ago. At this point, I felt helpless sarcastic and non-motivative reading reviewer’s comments. One reviewer mixed up neuroblastoma with a brain tumour,  so their comments were not relevant. Another just found no time to read through, the sentence was very short – ‘not a priority or interest‘. One more went to their area of expertise asking to fulfil it rather than comment on the actual focus of the study. Such comments are so common that any submission of results or a proposal could be considered as a draw. It has been neither my first time not the last. More to come.

At that time a friend of mine shared the reflection by a breast cancer survivor and now volunteer patient advocate at Europa Donna Ireland – The Irish Breast Cancer Campaign. 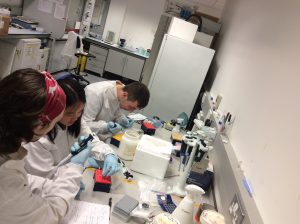 “Lastly, I would also like to say that research makes a difference to my life in another way, a less concrete but equally important way: it gives me hope. To know that excellent, focused research is happening in this country, to think that even I might be able to contribute to the success of this work, even to imagine that my daughter might grow up without fear of breast cancer – this gives me enormous hope.” (The full story can be read here)

It is always interesting to see what kids think about science and scientists. How their vision is affected by environment. A 7 year old boy drew a scientist in a funny but positive way. The scientist’s heart has a form of chemical flask.

Three years later, the same boy participated in the RDS Primary Science Fair which runs side by side with the BT Young Scientist and Technology Exhibition. The idea of this exhibition is very simple. It is a non-competitive event, showcasing STEM research projects (science, technology, engineering and maths) carried out by primary school classes across Ireland. The research projects encourage children’s native curiosity to explore the science behind the everyday.

His class presented a research project ‘Are We Living in the Dark Ages?’ The bunch of 4th class students were exploring the importance of sun light and electricity in our every day life.

A colleague of mine was ‘Head Judge’ at this Fair and pointed out the overall enthusiasm and positivity coming from these young children about the research undertaken. I personally was stopped by every school team. Children wanted to share their findings. The project and its presentation were very important for them.

Children are natural explorers and when their ability can be encouraged by the events like the RDS Primary Science Fair, then we, adults, can feel reassured that research can make dreams come true. Dreams about new effective therapies, spaceflights to new stars and planets and many more.

Researchers in health- and illness-related social sciences understand that the there is a life after the treatment completed. The life is full if diverse levels and issues from health related to social adaptation in different shapes and forms. Children and teenagers may experience fear when returning to school due to temporary or permanent changes to their physical appearance (1,2). They worry about their ability to socialise with their friends due to lengthy absences (3–5). Treatment can result in the development of learning disabilities in children and thus marking school as a major source of frustration (1,2). These learning difficulties can affect a child’s confidence and self-esteem, if left without attention and care (1,3). All studies come to the same conclusion. Challenges in education of children with cancer are complex, however most can be tackled efficiently through planning and good communication (1–5).

Recently researchers working in FRED HUTCH Cancer Research Center asked adult childhood cancer survivors a number of health related questions about the quality of lives (6,7). The results are far from optimistic: “chance of surviving childhood cancer has improved — but survivors’ overall health has not”. You can find more by following the link.

It is important not only to recognise the problems but to start changing the situation. Apparently much more could be done more efficiently if patients are involved in setting up future research agenda.

We do not hear much on neuroblastoma or childhood cancer in our everyday life unless we know a child affected by the disease. How much information can we get from newspapers? How do newspapers report it? What is their focus – a child, his/her family or social circles? In the next posts I will try to get insights from the content of newspaper’s stories.

To start with, I needed to select those newspaper articles that cover a story of a child with cancer over a period of time. To do that I selected a recent period  from January 1, 2010 to December 31, 2015 because two major events happened during this time.

The first was the 2011 Pulitzer Prize book written by Siddhartha Mukherjee ‘The Emperor of All Maladies: A Biography of Cancer’ which describing the history of both adult and childhood cancer treatment development and research (Mukherjee 2010).  Importantly, this book inspired to produce a documentary film of three episodes of two hours each and released in 2015 (Goodman 2015). Researchers in social sciences agree that the publication of a prominent popular science book can lead to increased media interest in the issues raised in the book (e.g.  (Nisbet & Fahy 2013).

Another most recent milestone was a breakthrough in childhood cancer management – the FDA approval of a novel drug Unituxin (dinutuximab) for neuroblastoma, the most common solid tumour in children (U.S. Food and Drug Administration 2015).

Then an a search for articles carried out looking for key words:‘child’, ‘children’, ‘childhood’, ‘kid(s)’, ‘cancer (s)’, ‘tumour (s)’, ‘treatment’, ‘chemotherapy’, ‘radiation’ and their combinations.  Only articles published by the UK national newspapers and included key words in either the headline or text were selected. The search returned 255 articles. Of 255 articles, 84 contained a story about a child with cancer. The rest were standardised obituaries in the ‘announcements’ or ‘deaths’ sections, horoscopes containing the word ‘cancer’, fundraising and charity activities not involving an identified child, funding initiatives related to pure cancer research and service, reports on scientific achievements or challenges were excluded.

The selected 84 articles were published by the broad range of local and national papers that are daily on sale through news outlets to a general public in the UK.

The Q1: What has been the level of media attention to childhood cancer?

In the last three years, in average 20 articles per year across 9 UK newspapers were published telling us a story about a child with cancer. In other terms it is less than 2 stories per month. It is not enough to raise awareness, educate the public and form their opinion. Tabloid editorial was more interested in this type of stories than broadsheet.  This observation is likely due to the nature of tabloid paper interests looking for people personal stories, entertainment, sports and scandal.

Unfortunately, no change in media coverage of childhood cancer was observed around these two milestones (in 2011 and 2015). All together it suggests that neither of them had a strong influence on journalists or editorials regarding childhood cancer coverage.

Interestingly, the growing trend in media coverage of children with cancer occurred by the increase in neuroblastoma coverage. Neuroblastoma had a nearly two fold boost in 2013 vs 2012 and then slightly declined in 2014 and 2015. Nevertheless, the FDA approval did not trigger attention to this cancer.

Goodman, B., 2015. Cancer: The Emperor of All Maladies, United States.

Mukherjee, S., 2010. The Emperor of All Maladies: A Biography of Cancer, US: Scribner.

* This study is a part of Dissertation submitted in partial fulfillment for the degree of M.Sc. in Science Communication