The research is a long-term investment. It is always built up on the work of the predecessors. Keep research running is crucial to make the dreams come true. Dreams for better treatment options and quality of life. 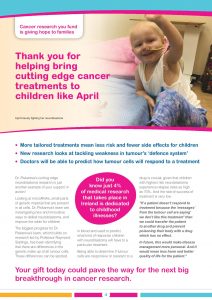 Thank you to everyone involved in raising funds for CMRF!

A Research Project Grant funded by National Children’s Research Centre will be starting in April.

The ultimate aim is to identify biomarkers of tumour response to drugs in the blood of children with high-risk neuroblastoma.

Challenge: Treatment regimens for patients with high-risk neuroblastoma involve intensive, multi-modal chemotherapy. Many patients response to initial therapy very well, but has only short-term effects, with most becoming resistant to treatment and developing progressive disease.

The project has two parts which complement each other.

How does this project contribute to the biomedical community?

This study aims to contribute to the better understanding of the disease mechanisms and scientific knowledge in the area, and in particular how neuroblastoma cells communicate with other cells helping tumour to create a unique microenvironment and protect themselves from chemotherapy pressure. The new data will give insights in biologically active proteins and miRNAs involved in cell-to-cell communication and drug responsiveness.

What are potential benefits of the proposed research to neuroblastoma patients?

This project aims to develop exosomal biomarkers of tumour response to drugs that might be used to help select patients for treatment and identify novel targets for the development of more effective personalised therapy with the anticipated improvement in outcomes. This work will contribute to the more efficient design of re-initiation treatment, sparing patients unnecessary rounds of chemotherapy and ultimately increasing survival. These new circulating markers will benefit children with high-risk neuroblastoma whose tumours are relapsed leading to less harmful and more tailored treatment options and improving their quality of life.

The results are fascinating! Cell nucleus is in blue (DAPI), cell actin is in red (phalloidin). You will be able also to see how two cells ‘having a handshake’. It is happening just in the middle.

How we work with cancer cell lines?

Cancer cell lines are sensitive and delicate in handling. They can only grow in the safe environment. Researchers have to protect them against bacteria, low temperatures, and too acidic/alkaline conditions. We protect cancer cells from bacteria contamination by handling them in cabinets where all plastic and media are sterile.

Cancer cells like to grow in conditions similar to conditions in human body. They like temperature of 36.6 – 37C. To achieve it special ‘green cell houses’ – CO2 incubators are built, which maintain the constant temperature, humidity and CO2 concentration.

The cell growth and well being are checked regularly using microscopes. Healthy cells are to have similar shape, even distribution and grow attached to the plastic surface. Most microscopes have a camera attached to the top and linked to a computer. It helps to take picture of growing cells and record changes in cell behaviour. 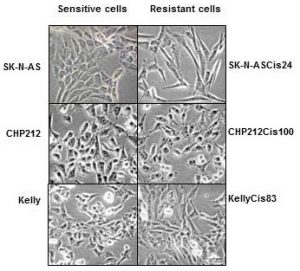 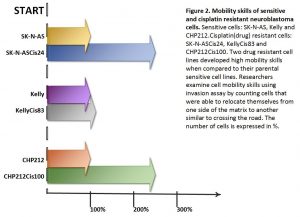