What a great start for 2020! Our long-lasting and productive collaboration with our colleagues from Tissue-Engineering Research Group Brough to live an important overview of the preclinical models for neuroblastoma. We particularly focused on the 3D in vitro models available.

During this exercise of searching and reading research papers, we found that researchers in neuroblastoma are looking for alternatives of traditional 2D culture. It is may be slow at the moment but the interest is there.

3D neuroblastoma models worked well in both validating known chemotherapies and screening new. The concepts and materials that were initially developed for bone or tissue regeneration can be used to a miniature model of neuroblastoma.

3D tissue-engineered models can accelerate drug discovery and development, reducing the use of animals in preclinical studies.

A compact pink oven-like device with a user-friendly interface and ‘magical’ disperse of cells and 3D environments. We bioprinted two types of neuroblastoma cells. One-easily forming clusters or tight groups and the high individualism in two types of homes: friendly and unfriendly. ‘Friendly’ homes have lots of clues to help cells to attach and grow. ‘Unfriendly’ homes have just a 3D niche aka house without furniture. Let’s see which homes cells like most.

An interesting idea or research question is always motivational. But it is a sketch till you get means to answer them. We, scientists, have to shape them into a proposal showing that we know limitations and have plans B & C if things go differently to planned. Then we apply for funding here and there… and many many times. The number of rejections makes us stronger – I hope. But one day, the idea may hit it right. So, it has happened to me recently and this SFI Award brings so needed fuel to study neuroblastoma.

The development and approval of new oncology drugs are very slow processes. This is mainly due to the big differences in the physiology of cancer cells grown on plastic and in the native microenvironment. Tissue engineering of tumour systems has a great potential to bridge this gap. This Award will help to advance our 3D tissue-engineered of neuroblastoma, that can be used in testing new drugs and new combinations of existing drugs.

In particular, we will adapt the 3D model to screen different immunotherapies. This treatment option is very attractive both for adults and children because of its specificity and reduced side effects compared to chemotherapy, the current standard of care.

This Award will help my team to get a better understanding how neuroblastoma cells interact with the body environment, particularly with the immune system and how we can use the knowledge to develop new treatments and improve the patient outlook.

Reading my posts, it looks like I am more enjoying the cultural part and almost forgot the main reason I crossed the Atlantic with the Fulbright wings.

The first month in the lab was more a warming up. Where is my desk? Where is the cell culture rooms? How do they run it? How different is it? So, many microscopes – am I capable of imaging? And so on and so forth…

My typical day starts at 8-8.30 am and finishes once all is done. It may be 6pm or 10pm. Once the experiment is set up, I have to monitor cells every 24 hours for 5-7 days with no weekends or days off. The monitoring includes imaging. Lots of imaging. Every condition has 20-30 single cells to follow up. Each cell gets its own GPS tag manually to be able to image exactly the same cell as it grows and becomes a group of hundreds by multiplication. For example, I am running 8 different cell lines in 3 experimental conditions. So, 20-30 cells per all 24 combinations give us 480-720 individual cells to follow up. The imaging takes ~5 hours every day. After 5 days, I will have 2400 – 3600 pics of cells to analyse. It will be fun! I may need lots of Guinness to fly through that numbers.

At the next step, I will select some of the conditions for video recording to trace cell fate from a single neuroblastoma cell to a metastatic niche consisting of hundreds of them. This video will show me how it all happens minute after minute.

Is not it exciting? I am thrilled!

Although the discovery could be applicable in principle to any a solid tumour, Dr Piskareva’s target is neuroblastoma, a relatively common child cancer which affects a specific type of nerve cells in unborn children. “It’s quite aggressive and unfortunately there are many children who have metastasis when they are diagnosed, and this is the most challenging group to treat.”

This was our 2nd time attending the OLCHC Research & Audit Day on May 25th, 2018. The conference provides a great forum for paediatric clinicians to share and update knowledge across different specialties through talks and poster presentations. It is insightful for basic biomedical researchers like us to see other perspectives.

I was delighted to know that two our studies were shortlisted. It is a rewarding feeling to see your Dream Team doing very well. One was the project of the Erasmus+ student Hanne Pappaert and the other was the project of NCRC funded Postdoc John Nolan. Hanne explored our 3D tissue-engineered model of neuroblastoma using collagen-based scaffolds with distinct mechanical properties. These new scaffolds were designed and manufactured by our collaborator Dr Cian O’Leary from Pharmacy Department and Tissue Engineering and Research Group (TERG) headed by Prof Fergal O’Brien. Hanne grew 5 neuroblastoma cell lines on the 3 scaffolds: hard like a rock, soft and fluffy like a cotton wool and a jelly-like. All cells liked the jelly-like environment. This environment is similar to bone marrow – the most common site of neuroblastoma metastasis. We were excited to see the difference as it means we are one step closer to reconstruct this type of tumour spread. 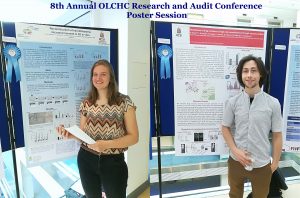 John has expanded our exploration of our 3D neuroblastoma model by examining the content of exosomes – little parcels sent by cancer cells in 3D and as tumours grown in mice.  We were thrilled to see a high similarity in the exosomal content. This finding additionally proved the great applicability of our 3D model as a tool to study neuroblastoma.

Our body has 3 dimensions: height, width and depth. Every single part of our body grows in the same 3 dimensions. This is true for cancer cells. Researchers use different ways to study cancer cells behaviour, how they grow and spread. We grow cells in the flasks, where they change their structure and shape and become flat losing one dimension. This is a very popular approach. We also grow cells in mice, where cells keep their 3D shape and mimic their behaviour to one observed in humans.

It is well known that we need to give a different amount of drug to kill cancer cells grown in flasks and in mice. This, in turn, delays the development of new drugs. Why does it happen this way? So, the drug works only on one side of the cell when they grow on the flat surface. In contrast, in mice, drug surrounds the cancer cell habitat and attacks cells at the edge first and then getting to those at the core. So we need more drug to kill cancer cells in mice.

We decided to design a new way to grow cancer cells that recreate their growth in 3 dimensions as in the human or mice body. We used special cotton wool like sponges as a new home for cancer cells and populated them with cancer cells. At the next step, we gave cells the drug at the different amount and checked what happened.

To understand cell fitness we stained them with red and blue dyes. On the left bottom side of the image, we see an equal amount of red and blue dyes telling us that cells were healthy and fit. Cells did not get any drug. When we gave a little amount of the drug but enough to kill cells in the flask, the balance of red and blue dyes was the same telling us that nothing really happened (the image in the middle). Cells were feeling well and healthy. The right bottom image has only blue dye. In this case, cells were given the amount of drug enough to destroy cancer cells in mice or humans. The lack of red dye tells us that this time the drug worked and killed the cancer cells. 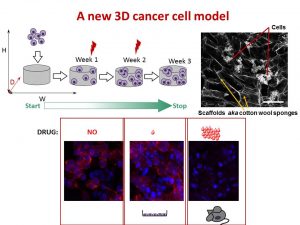 We found that the drug killed cells on sponges only at doses enough to do the same in mice.

So, we concluded the new tactic to grow cancer cells in 3D on cotton-like sponges can bridge the gap between traditional way and animal models. This new strategy to grow cells on sponges should help to understand cancer cell behaviour better and accelerate the discovery and development of new effective drugs for neuroblastoma and other cancers. This, in turn, will make the outlook for little patients better and improve their quality of life.

This work has been published in Acta Biomaterialia and presented recently at the Oral Posters Session at the 54th Irish Association for Cancer Research Conference 2018.

This study was supported by Neuroblastoma UK and National Children’s Research Centre.

You can find more at

The first month of the new year and the first challenge. Monday is the big day for me. In the essence, my grant application was shortlisted for the interview where I have to face the challenge and prove that I worth it.

The proposed application seeks to go to the US lab and gain an expertise in an interdisciplinary methodology to monitor and capture the dynamic of cancer spread (metastasis) in real time. This experimental approach would accelerate our understanding of neuroblastoma metastasis which is one of the reasons for failure in the treatment of neuroblastoma. If we know how neuroblastoma cells spread, then we can find the weaknesses in the process and create new drugs or use existing to target it.

I feel that sharing my worries with you makes me stronger. I am looking forward to this challenge with my head up and hope to feel your support at this crucial moment. 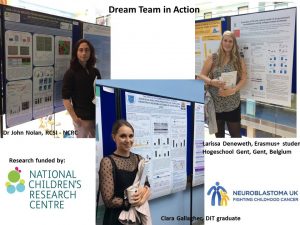 It is fantastic to see so knowledgeable and enthusiastic young researchers in my research group. This year, the team is multinational with the Irish students mixing with Belgian and Malaysian. All together they are cracking the code of neuroblastoma microenvironment and tumour cells communication through understanding main differences between conventional cancer cell models and tumours.

The big research plan of the entire team consists of more smaller and focused projects to be completed within 10-12 weeks. All projects are unrestricted, they are driven by the intellectual curiosity of these students. This way is full of ups and downs, frustrations and encouragements when techniques do not work or reagents do not come in as expected. Some cancer concepts can also work differently in the given settings. Simple questions are bringing more challenges than expected.  But at the end of the road is the best reward – contribution to the conceptual advancement of neuroblastoma microenvironment.