As a part of Science Week, our Department hosted Lab Safari for the secondary school students aiming to give a sense of what scientists do in the lab. The focus of my research is the identification of novel biomarkers for neuroblastoma response to chemotherapy. So, we decided to explain the concept of biomarkers and the importance of discovering novel biomarkers for neuroblastoma. Between me and John we covered biomarker’s basics and carried out the detection of MYCN in neuroblastoma cell lines. Here, I am summing up our activities in the form of Qs & As:

1. What are biomarkers?
Biomarkers are signposts of the body condition. Biomarkers – bio is for biological and markers – for molecules indicating that something is going wrong or differently in the body. They can help doctors to read these changes and identify a condition or disease. There are biomarkers for heart disease, cancer, diabetes and many others.

2. What type of molecules can serve as biomarkers?
Various types of molecules can do the job as long as they can differentiate the normal and abnormal process in the body. It can be DNA, RNA, proteins and hormones. These molecules can be detected in the blood, urine, stool, tumour tissue or any other bodily tissues or fluids.

3. How can we discover novel biomarkers?
Research, research and again research. We have to learn more basic facts about DNA, RNA and proteins. We need to be able to link this knowledge with health conditions including cancer. We need to identify how these molecules speak about the unhealthy conditions. We need to explore whether biomarkers exist within the disease that can predict the response to treatment and outlook.

4. What biomarkers are known in neuroblastoma?
There are various biomarkers that are specific for neuroblastoma. Catecholamines in urine are chemicals produced by neuroblastoma cells. Chromogranin A – is a protein that can be detected in the blood. It is unspecific biomarker because it can be secreted by neuroblastomas and some other tumours (e.g. pancreas and prostate cancer). Various chromosomal aberrations can be biomarkers of neuroblastoma aggressiveness. One of the strongest predictors of rapid neuroblastoma progression is MYCN status.

5. What is MYCN?
The MYCN is a proto-oncogene protein and a member of the MYC family of transcription factors.  MYCN was identified in 1983 and very soon became a routine biomarker for neuroblastoma aggressiveness. This protein is very important for the normal embryo development. The amplification of this gene leads to the excess of MYCN protein in cells prompting cells to grow and divide faster transforming normal cells into tumour cells.

6. How did we detect MYCN in neuroblastoma cell lines? 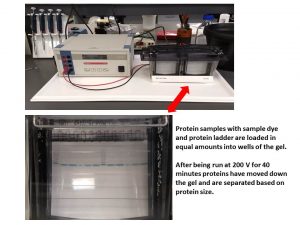 A day before the demonstration, we carried out some preparation steps. We selected several neuroblastoma cell lines with known MYCN status. Some cell lines had MYCN amplification, other didn’t. Among those that did have the amplification, the expression of MYCN protein was different giving us a good illustration of biomarker’s quantity. So, we run SDS-PAGE, a technique that helps to separate the cellular protein mix based on their size.

Then the separated proteins were transferred onto a membrane and exposed to a buffer containing an antibody for MYCN (primary antibody). This antibody recognises only MYCN. At the next step, we added another antibody that has a dual role – it can attach to the primary antibody and produce a signal that can be visualised. The next step would have been the visualisation itself and the one for Lab Safari. So, we were ready.

Once we finished the basics of biomarkers, we moved to the biomarker MYCN detection step. The buffer for visualisation was added and the membrane was imaged.

If you like this idea and want to have this demonstration for your science classes at school, please contact me and we would be happy to do it for you.