To be able to guide the treatment of neuroblastoma patients, doctors have developed a number of classification systems. Although sharing common features, they slightly vary by medical center, country and continents making direct comparisons of treatment results difficult. Doctors and scientists are trying to consolidate all systems in one in order to evaluate treatments in the past, currently ongoing and in the future.

Scientists have suggested a newer risk group classification system, the International Neuroblastoma Risk Group (INRG) classification that would incorporate the best knowledge gained and recent advancements in the disease imaging and neuroblastoma molecular diagnostics. This system is based on imaging criteria using the image-defined risk factors (IDRFs) and the prognostic factors such as:

Using these factors the INRG classification put children into 16 different pre-treatment groups (lettered A through R). Each of these pretreatment groups is within 1 of 4 overall risk groups:

This system has not yet become common across all medical centers, but it is being researched in new treatment protocols.

Doctors and scientists are planning to improve the INRG classification system by incorporating other molecular diagnostics data such as profiles of the neuroblastoma genome (DNA), transcriptome (RNA), and epigenome* in order to make precise prognostication even better.

* The epigenome is made up of chemical compounds and proteins that can attach to DNA and direct such actions as turning genes on or off, controlling the production of proteins in particular cells

Neuroblastoma is a childhood cancer. The word neuroblastoma consists of two words neuro and blastoma.The term neuro refers to nerves, blastoma  –  to a cancer of immature cells.

It starts in some types of nerve cells during embryo development.transforming immature nerve cells into cancerous cells. This type of cancer occurs most often in infants and young children mostly under the age of 5 years old.

The types of treatment used for neuroblastoma can include:

More details about neuroblastoma can be found here:

Cancer is an umbrella term that covers a group of diseases sharing the common features but diseases vary by site of origin, tissue type, race, sex, and age. One of the main features is an uncontrollable growth of cells. These cells are capable of spreading to other parts of the body. This process is also known as invasion and metastasis.

Though cancer in kids is not the same as in adults, childhood cancer cells behave in the same way. They grow uncontrollably and can travel to new destinations in the body.

This video ‘Cancer: from a healthy cell to a cancer cell’ nicely explains this transformation.

This video ‘How does cancer spread through the body?’ gives a perspective on the ways cancer cells travel in the body. 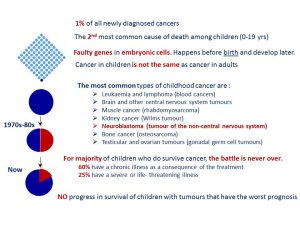 The dates for the SIOPEN AGM and Neuroblastoma Research Symposium were announced. This meeting will be hosted by the German So­cie­ty for Pa­ed­ia­tric On­co­lo­gy and Hae­ma­to­lo­gy and will take place @ Langenbeck Virchow Haus, Berlin, Germany on October 25-27, 2017. 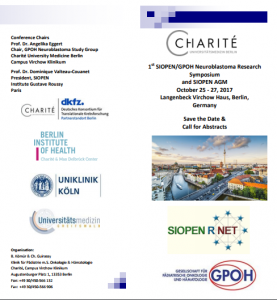 To increase the understanding of neuroblastoma pathogenesis,
progression and treatment failure and to improve survival
and quality of life for children with neuroblastoma.

It is very quiet in the lab this month. No troubleshooting, no more long working hours, endless repetition of experiments, smiles and upsets… Almost all students completed their projects, submitted their works for grading and graduated. The last student is finishing at the end of August.

It is fantastic to see so knowledgeable and enthusiastic young researchers in my research group. This year, the team is multinational with the Irish students mixing with Belgian and Malaysian. All together they are cracking the code of neuroblastoma microenvironment and tumour cells communication through understanding main differences between conventional cancer cell models and tumours.

The big research plan of the entire team consists of more smaller and focused projects to be completed within 10-12 weeks. All projects are unrestricted, they are driven by the intellectual curiosity of these students. This way is full of ups and downs, frustrations and encouragements when techniques do not work or reagents do not come in as expected. Some cancer concepts can also work differently in the given settings. Simple questions are bringing more challenges than expected.  But at the end of the road is the best reward – contribution to the conceptual advancement of neuroblastoma microenvironment.

There is no short answer. Research is a slow, meticulous process of testing theories and finding out which ones work.It is exactly the same for both curiosity- and disease- driven questions. Long years of ground research full of ups and downs are critical for any breakthrough or progress. Very often with more downs than ups. Importantly, all researchers build on the work of their predecessors. This is the nature of science.

To understand the world around us, we have to do be curious and do “blue sky or curiosity-driven” research. It is a long shot, but this type of research can lead to practical applications down the road. One of the most recent examples is a drug Vismodegib (Erivedse) to treat basal cell carcinoma (the most common type of skin cancer) approved by the FDA in 2012. This drug targets genes of a hedgehog-associated signalling pathway. Defects in this pathway were found to drive many cases of skin cancer. But, how this relationship was found? Blue sky research!

Researchers studied hedgehog signalling in fruit flies and mice. One of the researchers had a strong interest in a fruit fly gene called hedgehog. If this gene is defective, then fly embryos look stubby and hairy aka a hedgehog. Further research brought more interesting facts and relationships leading to the identification of a drug that can stop the function of this faulty gene. Decades later with the advancement of genome sequencing, the defect in hedgehog signalling pathway genes was identified in patients with locally advanced and metastatic basal cell carcinoma.

What would happen if there were no research in fruit flies and mice? There would have been no rationale to create a drug like Vismodegib!

The best discovery research is unrestricted. It is driven by intellectual curiosity and conceptual advancement. More such curiosity- driven research is needed. For every medical breakthrough, for every Vismodegib, there were hundreds of blind alleys and failed ideas.

The research is a long-term investment. This contradicts to the short-term life of the politicians and governments who give the money. They do not take the risks. So, the discovery research becomes critically underfunded.

Thank you all who support cancer research charities!

This meeting is the biggest event for Irish cancer researchers.

This is the first time in the history of the IACR meetings when an entire plenary session is solely dedicated to challenges and advancements in childhood cancer.

This session will unite Internationally recognised leaders in childhood cancer research. They will speak about what we know about origin and evolution of childhood cancers (Prof. Tariq Enver), how blood biomarkers can help in stratification and treatment of children (Prof. Sue Burchill), what impact Down syndrome has in the white blood cell cancer development and progression (Prof. Irene Roberts), how epigenetic changes affect tumour pathogenesis and future of therapeutics targeting theses changes (Prof Raymond Stallings).

Today, we are celebrating International Childhood Cancer Day to raise awareness and to express support for children and adolescents with cancer, survivors and their families.

Childhood cancer is an umbrella term for a great variety of malignancies which vary by site of disease origin, tissue type, race, sex, and age.

The cause of childhood cancers is believed to be due to faulty genes in embryonic cells that happen before birth and develop later. In contrast to many adult’s cancers, there is no evidence that links lifestyle or environmental risk factors to the development of childhood cancer.

Every 100th patient diagnosed with cancer is a child.

Childhood cancer is the second most common cause of death among children between the ages of 1 and 14 years after accidents.

Unfortunately, no progress has been made in survival of children with tumours that have the worst prognosis (brain tumours, neuroblastoma and sarcomas, cancers developing in certain age groups and/or located within certain sites in the body), along with acute myeloid leukaemia (blood cancer). Children with a rare brain cancer – diffuse intrinsic pontine glioma survive less than 1 year from diagnosis. Children with soft tissue tumours have 5-year survival rates ranging from 64% (rhabdomyosarcoma) to 72% (Ewing sarcoma).

For majority of children who do survive cancer, the battle is never over. Over 60% of long‐term childhood cancer survivors have a chronic illness as a consequence of the treatment; over 25% have a severe or life‐ threatening illness.